There’s something unparalleled about the pageantry of college football. When I learned that Alabama would be facing Notre Dame for the National Championship and it was being played only a couple of hours away from where I was for the winter, I decided that I’d have to take in the festivities. Being a cultural documentary photographer the norm is to turn our cameras outwards, to document cultures far different from our own. This time I was to document the culture as an insider. In the interest of full disclosure I was raised on the Alabama Crimson Tide.

The first stop was to hear Coach Nick Saban speak at a bowl preview show at the Fountainebleau Hotel. Coach Saban answered questions from fans and appeared relaxed, yet focused as ever. When one fan’s question related to the talk swirling around about the coach possibly returning to coach in the pro’s, he indicated that there was nothing for them to worry about. It appears he’s at Alabama to stay.

We didn’t know it at the time, but Saban’s Alabama team would finish the season #1 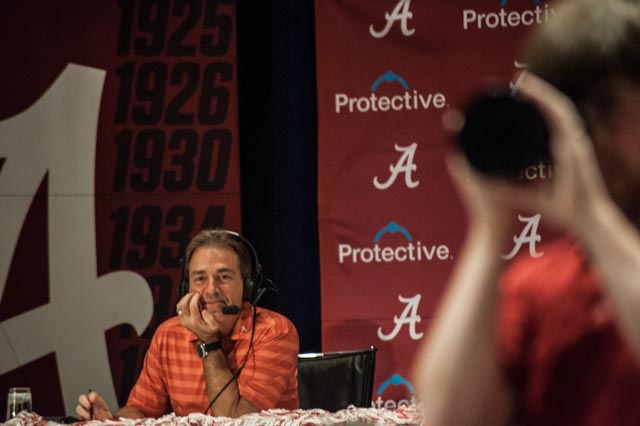 The event took place at the Fountainebleau Hotel, where wearing really high heels is apparently elegantly and stylishly fashionable

The tailgating before the game is always lively. Both team’s fans are full of optimism and expect their boys to win. The Notre Dame fans seemed to far outnumber those wearing crimson and white, the colors of the Alabama team. Notre Dame had last won a national championship in 1988 and were expecting to knock off Alabama and return to glory. It was rumored that they’d brought over 600,000 fans to Miami. It sure seemed like it. Alabama, the winner of 2 of the past 3 national championships was hoping for an historic evening. A win would catapult them into the status of a dynasty as they’d own the national title in 3 of the past 4 years, something Notre Dame did in the 1940’s and Nebraska did in the 1990’s, but no team since. Win they did. From the first hand-off to running back Eddie Lacy the tone was set and Alabama was to smash Notre Dame in a most dominating fashion. For those who wear crimson it was a thing of absolute beauty. Alabama’s storied history has written a modern day chapter that few could have envisioned. It seems destined to grow.

This blog will take a look at the pre-game festivities and the tailgating that occurred throughout the game in the parking lot of Miami Garden’s Sun Life Stadium. I hope you’ll enjoy it, and Roll Tide! Alabama beat Notre Dame 42-14.

The Notre Dame fans came out in huge numbers 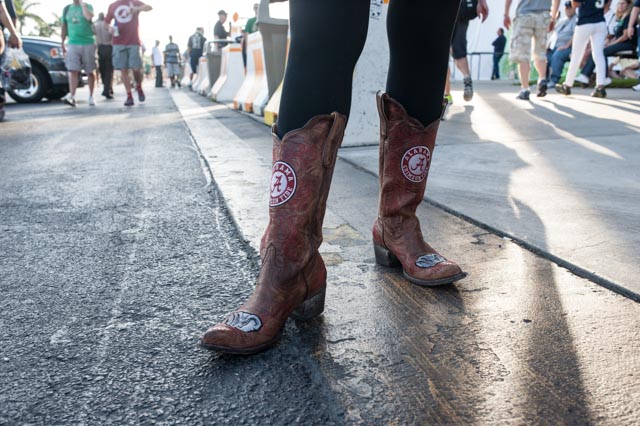 A Bama fan’s boots do some talking

The color green was out in abundance

The night was certainly apocalyptic for Notre Dame fans, the shirt makes reference to the famous Four Horsemen of Notre Dame 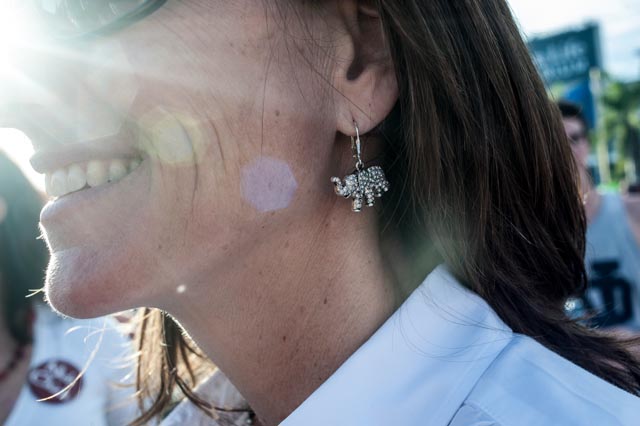 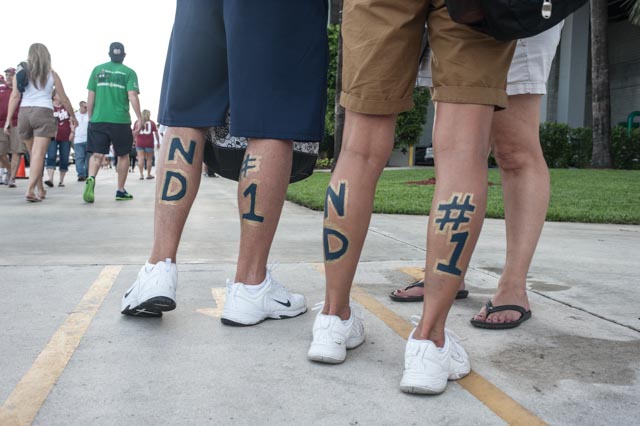 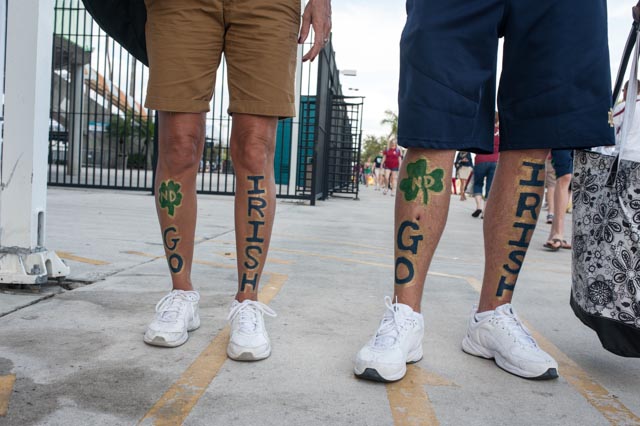 Golden leggings for the Golden Domers 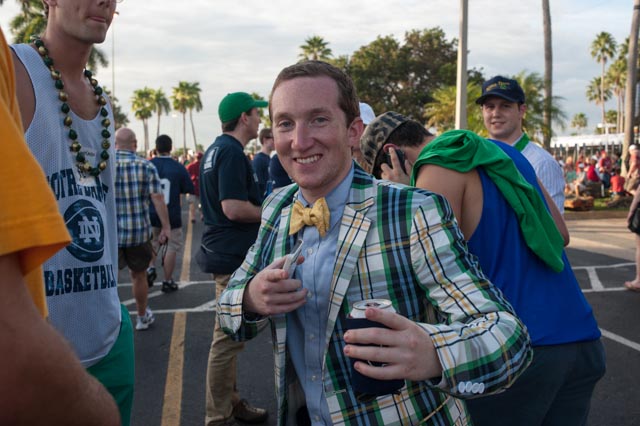 Another leprechaun takes on the fighting Irish pose

An Alabama fan in houndstooth 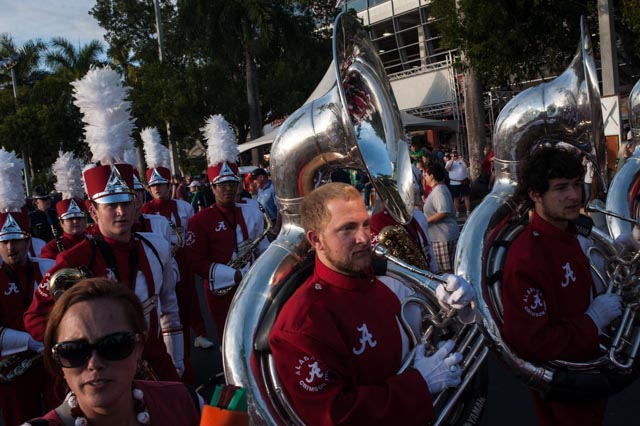 The Bama band came marching through

And when you turned around there was yet another leprechaun

The Bama band heads towards a pep rally 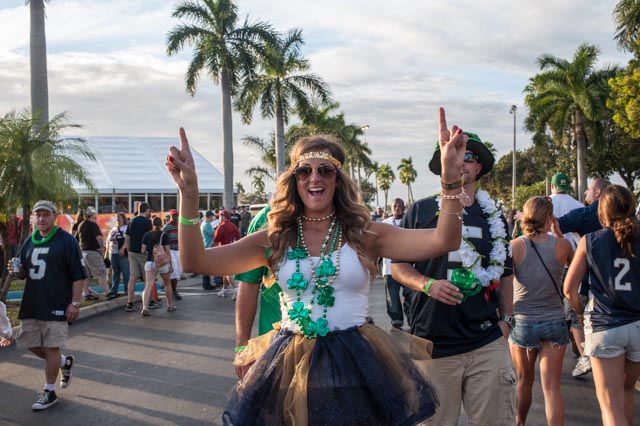 Just as clearly from Alabama

And some wore fur, it is winter in South Florida 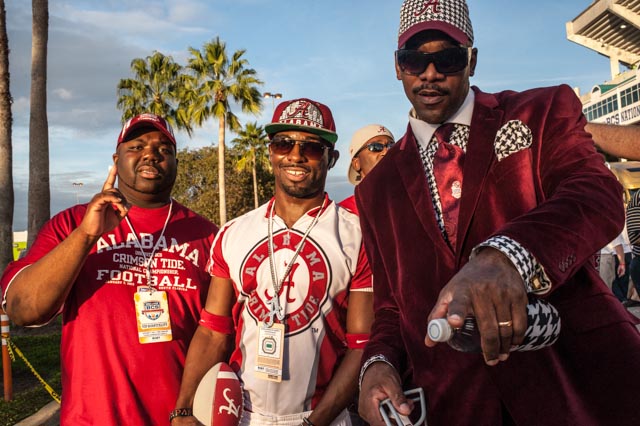 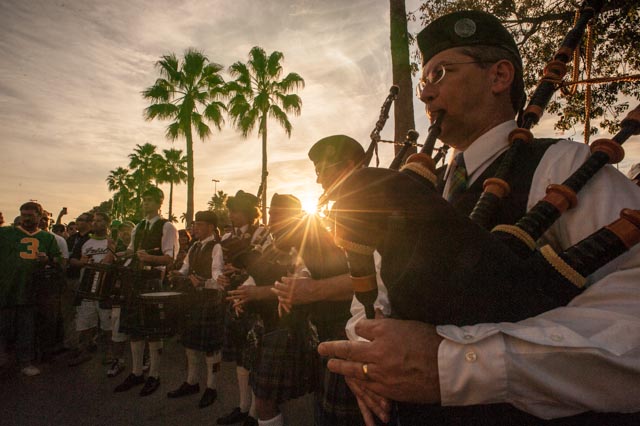 Seeing the bagpipe players come out was a real treat, the Notre Dame faithful loved it 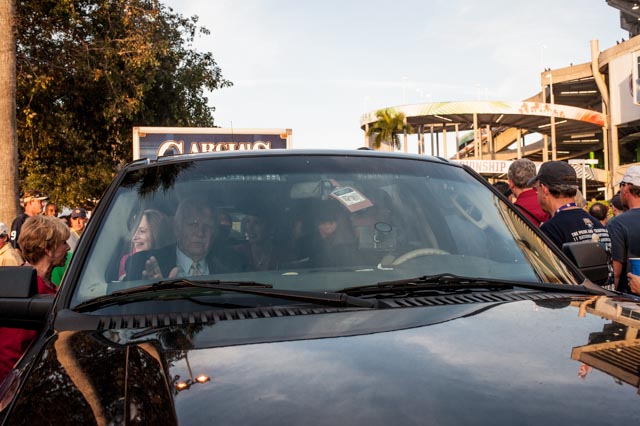 Alabama’s athletic director Mal Moore arrives at the stadium. His hiring of Saban to coach Alabama was an act of brilliance

A Tide fan streaks through the Notre Dame band 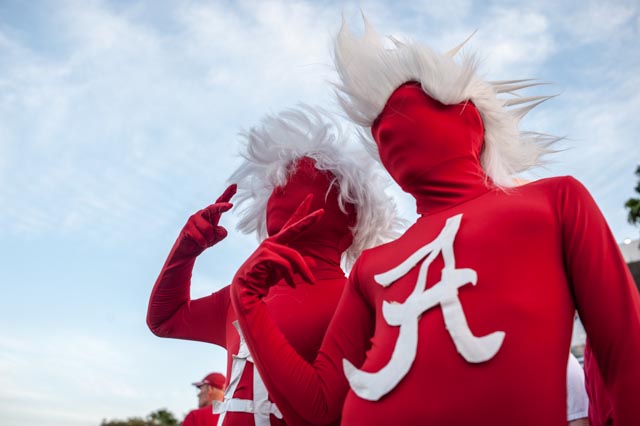 Is a caption really necessary? 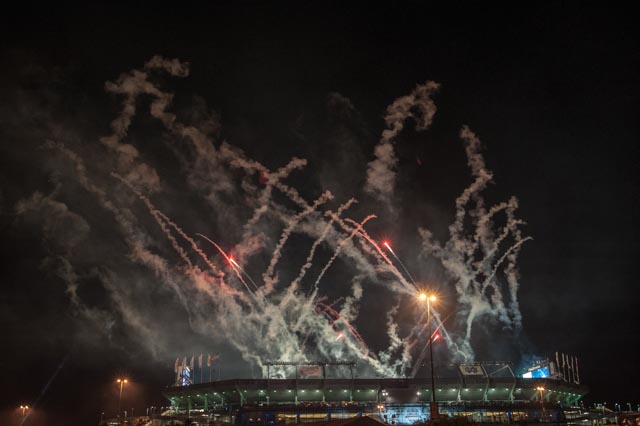 There were enough fireworks from Alabama in the first half to put the game out of reach. It was 28-0 at the half 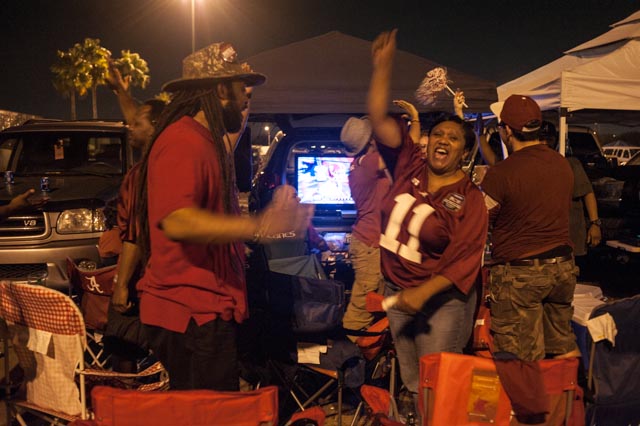 Bama fans continued to party in the 3rd quarter

By the 4th quarter it had turned to dancing

Most Notre Dame fans didn’t want their photos made after the game, but these folks were still having fun, perhaps because they hadn’t spent $1000 to watch their team be decimated 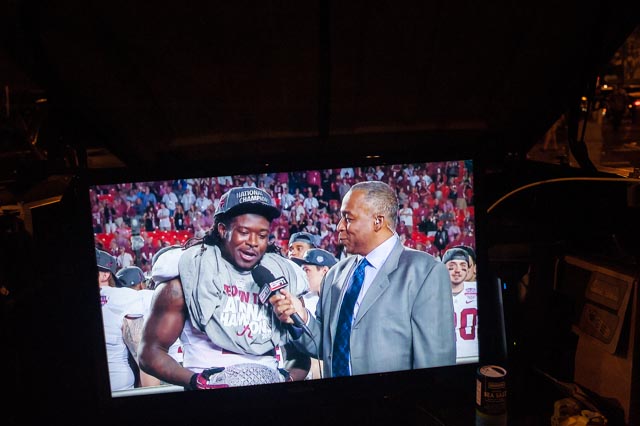 By the time the night was over Alabama was holding another crystal football. You get the feeling it won’t be Alabama and Saban’s last. Roll Tide!

Thanks for dropping by, over the next few weeks we’ll take a look at those exotic foreign cultures again. I was thankful this week to get to appreciate my own.